The Desktop Regulatory State
The Countervailing Power of Individuals and Networks

Defenders of the modern state often claim that it’s needed to protect us — from terrorists, invaders, bullies, and rapacious corporations. Economist John Kenneth Galbraith, for instance, famously argued that the state was a source of “countervailing power” that kept other social institutions in check. But what if those “countervailing” institution — corporations, government agencies and domesticated labor unions — in practice collude more than they “countervail” each other? And what if network communications technology and digital platforms now enable us to take on all those dinosaur hierarchies as equals — and more than equals. In The Desktop Regulatory State, Kevin Carson shows how the power of self-regulation, which people engaged in social cooperation have always possessed, has been amplified and intensifed by changes in consciousness — as people have become aware of their own power and of their ability to care for themselves without the state — and in technology — especially information technology. Drawing as usual on a wide array of insights from diverse disciplines, Carson paints an inspiring, challenging, and optimistic portrait of a humane future without the state, and points provocatively toward the steps we need to take in order to achieve it. 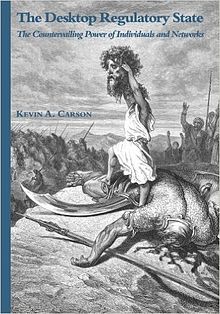 You're viewing: The Desktop Regulatory State $14.00
Add to cart